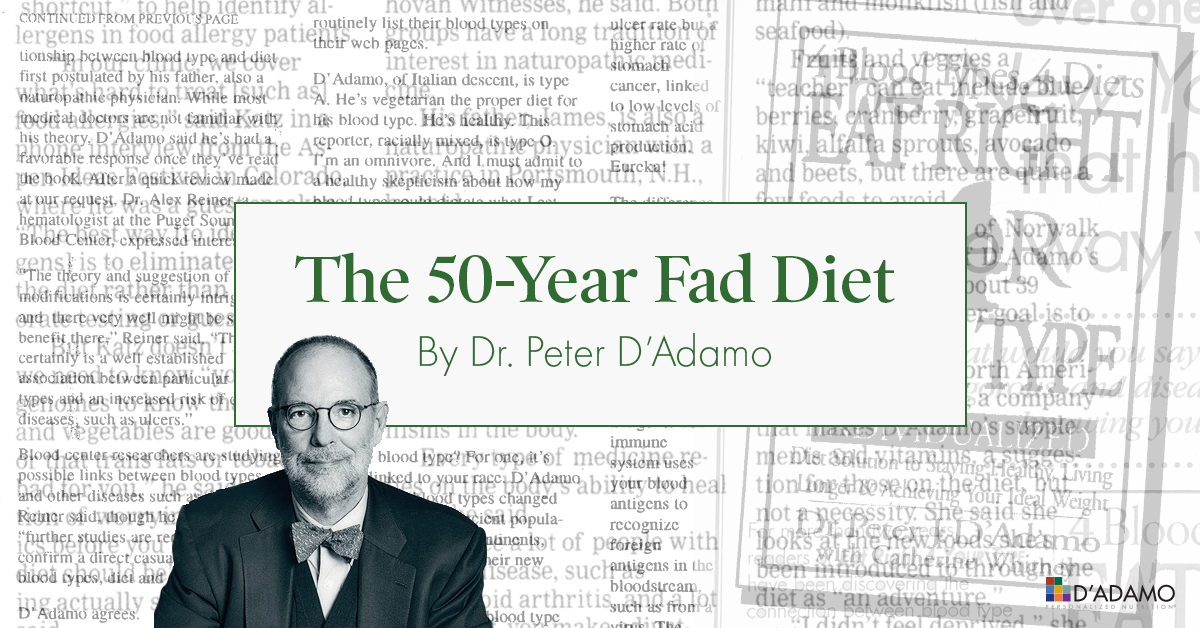 The Dunning-Kruger effect is a type of cognitive bias in which people believe that they are smarter and more capable than they really are. In a nutshell, ignorant people do not possess the skills needed to recognize their own incompetence.

Almost everyone who follows my work has heard at least once in their life that ‘this Blood Type Diet is just a fad—my dietician told me so.’ But how many of these authorities ever took the time to address their own lack of information before arriving at their conclusions?

Before I attempt to answer this question, I’d like to acknowledge that I actually believe individual dieticians have positive values and honest scientific attitudes. Unfortunately, they inherit a dogmatic education and rigid cultural allegiance that stifles innovation.

However, theirs is an abysmal track record. Even if we skip over the earliest decades of dietician-provided nutrition advice, characterized by countless hospital meals comprised of cooked-to-death defrosted peas and carrots, brutalized meats and deserts comprised of gelatin topped with non-dairy whipped crème, their adoption of each passing fad, often driven by agribusiness interests and their own need for corporate donations, makes for alarming reading. A good example is the checkered history of the American Dietetic Association (ADA), their fat-phobia stance and claims that sugar ‘can be part of a healthy balanced diet.’

As reported by The New York Times and other outlets, information has come to pass that a trade group called the Sugar Research Foundation, known today as the Sugar Association, paid three Harvard scientists the equivalent of about $50,000 in today’s dollars to publish a 1967 review of research on sugar, fat and heart disease. The studies used in the review were handpicked by the sugar group, and the article, which was published in the prestigious New England Journal of Medicine, minimized the link between sugar and heart health and cast aspersions on the role of saturated fat.

One of the scientists who was paid by the sugar industry was Dr. Mark Hegsted, who went on to become the head of nutrition at the United States Department of Agriculture and where in 1977 he helped draft the forerunner to the federal government’s dietary guidelines.

Dr. Hegsted used his research to influence the government’s dietary recommendations, which emphasized saturated fat as a driver of heart disease while largely characterizing sugar as simply empty calories linked to tooth decay. Today, the saturated fat warnings remain a cornerstone of the government’s dietary guidelines, though in recent years the American Heart Association, World Health Organization and other health authorities have also begun to warn that too much added sugar may increase cardiovascular disease risk. This suggests that five decades of research into the role of nutrition and heart disease, including many of today’s dietary recommendations, may have been largely shaped by the sugar industry.

In 1953, researcher Ancel Keys made a data analysis on 22 countries and found no correlation between dietary fat and cardiovascular disease. He was ridiculed because he lacked strong evidence for assumptions and reports. So, what he did was fake the data. He only used data from the countries that supported his theory, a process known as cherry picking. He kept only seven countries in which there was a correlation between fat intake and heart disease. Furthermore, the correlation was not between all forms of fat but instead solely between heart disease and margarine consumption.

He intentionally left out:

After Keys made the cover of Time magazine on Jan 13, 1961, the American public was introduced to the idea that saturated fats were clogging their arteries, and that idea ultimately led to a sea change in the foods we eat. Processed foods would increasingly replace real foods, and the era of obesity and chronic disease would begin.

So, when an agribusiness-genuflecting ADA dietician talks about 'fad diets,' you may want to remind them that for at least five decades they stood behind the greatest fad diet of all time.

As for the claim that The Blood Type Diet is ‘just a fad,’ I’ll end with just a short anecdote.

Two years ago, I had the opportunity to revise the original text to my first book, Eat Right For Your Type, now over twenty years in print. Upon review, very little of the technical material needed alteration, and a surprising amount of what, at the time, were theories and assertions have been proven true by rigorous research. All that was required to produce the revised edition was to include new information that had been discovered since the original was first written.

So which exactly is the fad diet?